All locations are now open for dine-in, drive-thru/curbside pickup and delivery from 11am-9pm daily. 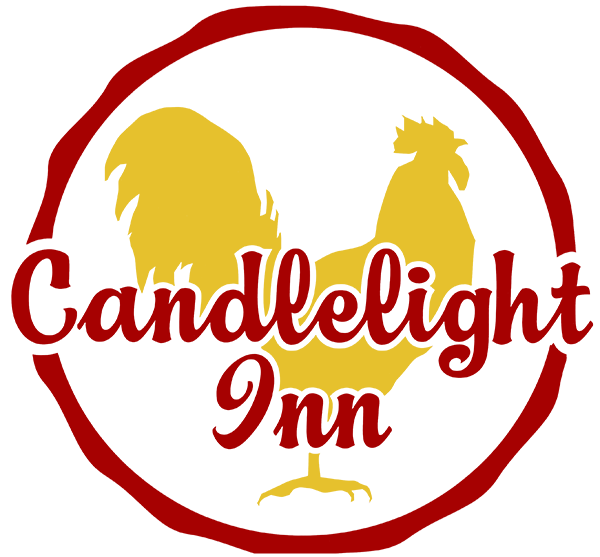 The Candlelight Inn opened in June of 1967 under the ownership of Chuck Sisson, Lyman Prescott and Bob Prescott. After a short period, Chuck and Lyman left the business, although Lyman continued to own the building. The business thrived for more than 20 years, especially after the invention of Chicken George in the early 1970s.

In the mid 1980s Bob and his wife, Jan, decided that their next move should be to buy the building the restaurant occupied at the 100 block of West Third. However, Lyman Prescott did not want to sell. Thus, they looked at other options and settled on a location on the north end of Sterling, 2907 N. Locust. The building actually had been a barn at one time but was remodeled into a restaurant over the years and, before the Prescotts' purchase in 1989, it was a restaurant known as “The Country Squire.” They moved the business, remodeled and added on. Their customers followed them, and the Candlelight grew.

In 2000, their son Matthew came home and took over the responsibility and ownership of the Sterling location. He saw a need to continue building the business, and in 2004 he built the Candlelight Inn at 2200 First Avenue, Rock Falls. The new location brought a whole new look and attitude to the Candlelight Inn name. In 2010 he leased the restaurant and marina in Clinton, Iowa, at 511 Riverview Drive, once again bringing a fresh perspective when his customers think of the Candlelight Inn, now one with a deck that overlooks the beautiful Mississippi River.

The Candlelight Inn has a reputation of hiring the best people, serving the best-quality product and having the best facilities. We know our customers expect a high level of consistency, and we will bend over backward to make sure they get it – whether our customer is in Sterling, Rock Falls or Clinton.

The Story of Chicken George

In the early 1970s, Bob Prescott, founder and father of the current Candlelight Inn owner, Matt, was busy serving his guests at the Candlelight Inn in the 100 block or West Third in downtown Sterling. One of his regulars, a gentleman named Roger Young, came in to dine. Roger asked Bob for “something different.” Immediately, Bob thought about his fry cook George's new dish. George was de-boning and cutting up chicken breasts and lightly battering them. He then fried them up and served them – to himself. Even Bob hadn't tried them yet! Bob asked George to fix some up for Roger, and the rest is history.

Roger loved them, and asked Bob what he should ask for when he came in to eat the next time. Bob told him to ask for “Chicken George” because that was the name of the cook who made it. The news of this new chicken dish spread with people coming in requesting it before it even made it on the menu! Word of mouth had made Chicken George famous.

Named after the cook who brought it into the restaurant, the three Candlelight Inn Restaurants now serve an average of 6,000 pounds of Chicken George each week.

What is Chicken George?

Visit our three locations in northwest Illinois and eastern Iowa.

Being a locally owned company, Candlelight Inn realizes how important the community is to our success. This is our way of rewarding our loyal customers while giving back to the community at the same time.

Why a fee to participate, you ask? There are several reasons for this fee.

Easily check your rewards balance by visiting this link. Rewards are calculated at all Candlelight Inn locations and our sister locations: Palmyra Pub & Eatery, Brink's and Corner Tap.

Candlelight Inn offers a fundraising program that allows groups to earn 10% of all local Candlelight Inn sales during a certain time period on a designated evening. We'll partner with organizations such as non-profits; church groups; relief groups, school groups tied to music, drama, speech, academics and athletics, etc.; civic organizations; and families dealing with terminal illnesses, catastrophic events or losses. If your group is not listed here, contact us at 815-625-2600 or email event@saukvalleyevents.com. Click here to download a Candlelight Gives Back Fundraising packet for more information.

If you are an organization seeking donations or sponsorship from Candlelight Inn for your event or activity, please download and fill out our Donation/Sponsorship Request form, and turn it in to any Candlelight Inn Restaurant.